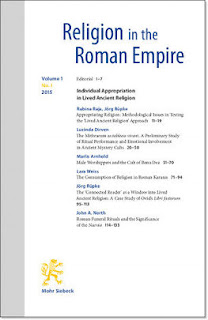 This week, we would like to call your attention to the still very much new journal called “Religion in the Roman Empire” whose issue 2.2 has just been published. The journal has set its sight on encouraging new and cross-disciplinary debate in the field of Religion and Classical Studies: “Religion in the Roman Empire (RRE) is bold in the sense that it intends to further and document new and integrative perspectives on religion in the Ancient World combining multidisciplinary methodologies. Starting from the notion of "lived religion" it will offer a space to take up recent, but still incipient, research to modify and cross the disciplinary boundaries of History of Religion, Archaeology, Anthropology, Classics, Ancient History, Jewish History, Rabbinics, New Testament, Early Christianity, Patristics, Coptic Studies, Gnostic and Manichean Studies, Late Antiquity and Oriental Languages. We hope to stimulate the development of new approaches that can encompass the local and global trajectories of the multidimensional pluralistic religions of antiquity.”


Following the link, you will be directed to the new issue entitled “Discourses and Narratives, Experiences and Identities”. You will also be able to download a lengthy sample of the journal for free.
Posted by FIECNET at 22:28